Continuing with the ocean theme....

I spent the second weekend of October in OCMD attending Salty Yarns' Jamboree.  I had attended this annual event years ago but because it is the weekend after my guild retreat, I have begged off Jamboree in recent years.   Well no more; the Jersey Girls are ready to sign up again.   What a fabulous retreat.   The goodies, the projects, the teachers, Sally and Sara, and being back as part of the Jersey Girl Foursome of stitchers was really fabulous.  It was touch and go for a while because of the pandemic and I was so happy when we got the all clear that it was on.   Granted all the necessary temperature taking, sanitizing, mask wearing, social distancing was done.   It really was not any problem to do those things.  A small price to pay to  be able to get together and stitch on the fabulous projects.  Sara was great recording a Zoom Meeting of the classes for those who could not attend in person.    All the projects were  a tribute to the Lankford Hotel in anticipation of its pending demolition and rebuild.   Like so many other things this year, the demo and rebuild have been delayed because of the pandemic.

The three classes this year were with Fern Ridge, Erica Michaels Designs and The Stitching Parlor.   My first class of the weekend was with Clara of the Stitching Parlor.   She did her research of Ocean City and focused her piece on the early 20th century in OCMD.   The needle book and smalls she designed were a lovely look at OCMD of yesteryear complete with old fashioned bathing suits and carousel horses. The needle book included a thimble holder and thread winder as well as all the fabrics, flosses, interfacing and some beach themed extras all nice and tidy in a binder. 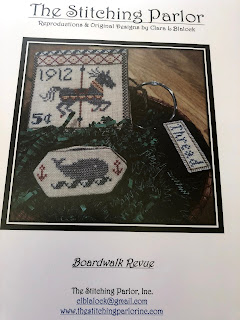 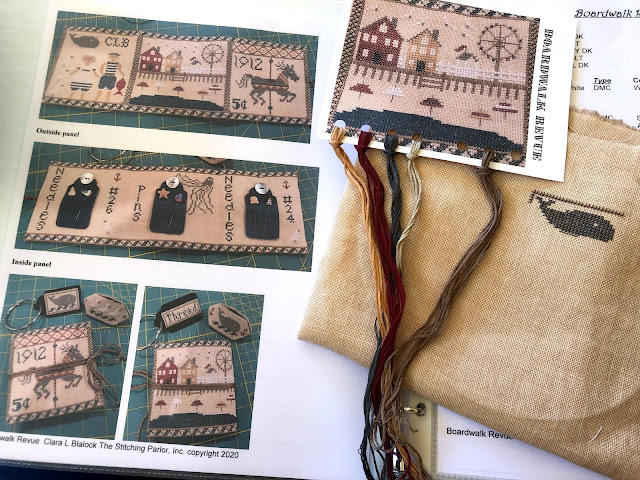 My second class was with Fern Ridge.  I have never done peyote beading so I was a little apprehensive.......for no reason.    Their project feature the beloved rockers we so enjoy sitting in on the front porch of the hotel.  Once you get the hang of beading, you fall into a rhythm and I had three experienced table mates to help me if I got stuck.  I didn't finish the scissors fob until after I got home.  It is not 100% perfect but I am totally 100% happy with the result.  I could be convinced to do peyote again. 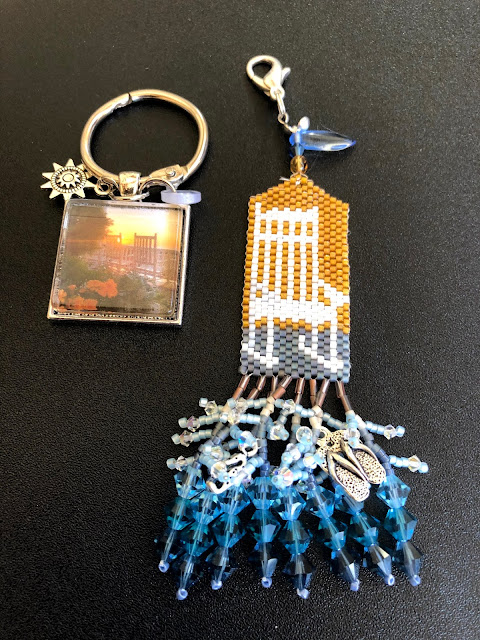 My Sunday class was with Linda of Erica Michael Designs.   Again, like Clara, what a fabulous kit she had prepared for us.   Erica Michaels provided a wooden tray with a mat featuring the Lankford.   The hotel is front and center on the front of the piece.    The mat unfolds to show the boardwalk and the beach.  Further down the blue fabric represents the water.  She included a signature strawberry. 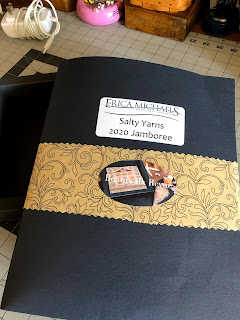 We left with ideas and charms to embellish the beach and water.   Close it up and it fits in the tray with the strawberry and the other two class projects.   These teachers really put their heads together to make an awesome coordinating set and such a lovely sentiment to honor the Lankford. 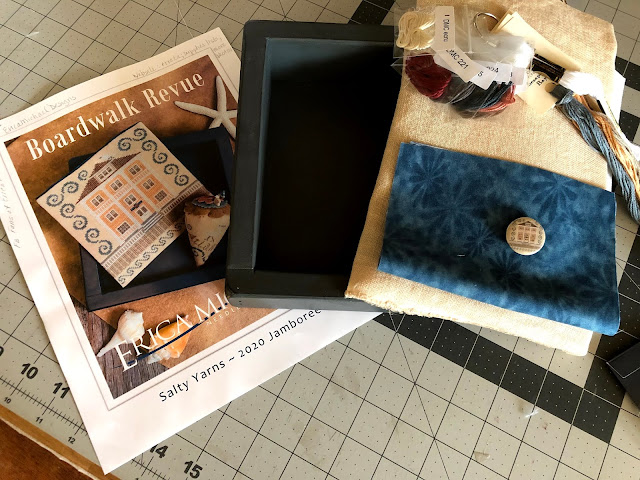 So retail therapy continued on this weekend while shopping the trunk shows.  Not only did I win while at there the prior weekend for my guild retreat, I won again this weekend coming home with the “honor” for most spent.     I need not buy anything between now and next Jamboree.....but need and want are two different things aren't they? 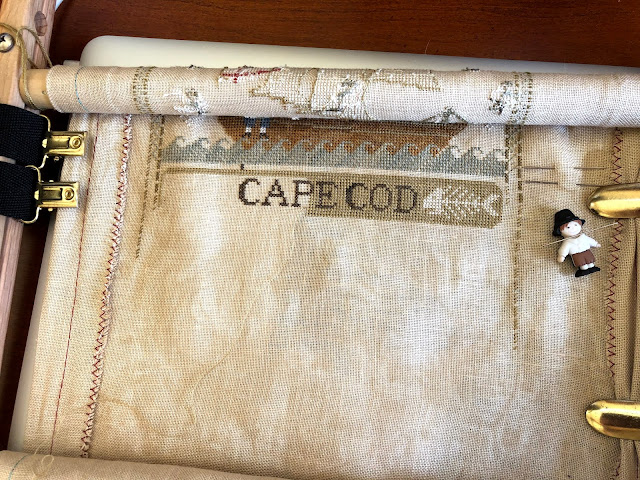 I made just minimal progress on Coming to America.  I struggled with stitching the fish skeleton on the left.   I mean really, how many times can you use that in a sentence?  I am sure my sampler will not be making the completed voyage in the allotted time but it's OK.  I already decided I would stitch on it only until the day the Mayflower docks.  I need to get back to Raegan's stocking to get it finished for Christmas and my poor planning has another SAL that started October 1st.   I don't expect much stitching time in the near future either because I returned home to be by my sister's side.   Her husband was injured in an accident four weeks ago and has been in ICU in a coma since the accident.   He passed late Monday peacefully having never regained  consciousness.   He was surrounded by my sister, his daughter, and step-daughter.  So sad because he was doing nothing wrong and the other vehicle left the scene just leaving him laying there.  He was such a great guy who was loved by all.  The outpouring my sister has received since the accident has been a tribute to how wonderful of a man he was.

It's easy for many to say during this unimaginable year of 2020 that they have had enough.  I  now myself included.  Come on 2021!

PS  Pardon any weird formatting.....so much for Blogger upgrades.   No matter how many times I set the font size, inevitably I log in to find it has changed.   Sometimes I am frustrated with "improvements".

Robin, keeping your sister and family in my thoughts and prayers. It sounded like you had a good time at Jamboree with wonderful projects, teachers, and fellowship.

So sorry for your families loss ,so sad .

Sounds like you did manage a great time at your Jamboree.
Keep safe a new year is not to far away.

Robin, So sorry to hear about your sister's husband..my thoughts are with you and her family.

Robin: I am so sorry for your loss, how horrible that the other person left the scene, I hope they caught that person.
I am sick of 2020 I will be glad and really happy when 2021 rolls around, I have never wanted time to fly by but this year I do.
It sounds like a wonderful retreat, so many beautiful class's, I must do a Fern ridge project someday, I love beads.
Coming to America, what a beautiful design, I hope you do get to keep on schedule with it.
Have a great day

Sorry to hear about your sister's husband, prayers for his family.
Those project from Jamboree all look so wonderful, & what great memories of the Hotel.
Marilyn

I'm so glad you had a great time at Jamboree.
Such great projects.
My thoughts and prayers are with you.
Shirley

So sorry for your family's loss!

Please check out the Corsica River SAL on FB

Designers, Quilting and Others